Thank you for loving me so well that it reflects in the way our boys love me too and all my crazy ways. When I called them from the turkey pen to say Bill Riddle was sick and we have to take him to the animal hospital, they did not hesitate, just like you would have not hesitated if you were here. We left immediately, turkey in tow.

You will be glad to know that I took the tarp that we were using for the bathroom remodel and I sat on it in the backseat while holding the turkey in my lap. It was the longest ride ever. I never knew how warm a turkey was, but with him on top of me, wrapped in a heavy towel, a full sized fleece blanket, sitting on that plastic, all at once I was stricken with a menopausal hot flash. At this point Glen looked slightly put out, you know that look, he inherited it from you, the look was because I had him taking pictures and adjusting the air flow. Christopher was in professor mode attempting to debunk my newly formed phobia of us developing avian bird flu because of the closed vehicle we were now all trapped in with my sick bird. He had all kinds of scientific facts and government conspiracies he spoke of while Glen and I slipped into that silent stare that occupies a long and dreaded car ride. Bill Riddle went to sleep. I thought he had died but Glen said no, we pressed on.

Upon arrival at the vet they ushered us directly into the little room. I unwrapped Bill Riddle and he stumbled a bit to get his footing. You know he has been on his roost for two days and I’ve been worried and today him laying in the corner of the pen, lathargic, was too much for me to bare but remarkably he became a bit more interested in his surroundings and perked up. I filled out paperwork while he pulled at the ink pen. He then got in my lap and had explosive diarrhea, all over me and the smell chased both boys from the room. Bill Riddle and I were on our own.

They came and took Bill, who went very compliantly, and brought him back. Then the vet tech swabbed me for a fecal sample and we waited. The doctor came in and we chatted. I was getting nervous because the boys had to be at their PE class so I phoned a major favor into a friend, asking for a ride. Chris Wilson, this is one of many reasons why you need friends. I’m sure you would argue that point if this wasn’t just in a letter to you but I will just leave it at why “I” need friends. 😉🤪😘 Of course she said yes and I dropped the nonchalant bomb did she mind if I had my turkey? Bless her heart. She did say I was pushing boundaries but showed up, in her Lexus, with full knowledge that her friend is crazy.

The boys had left and Jackie and I wrapped things up with the vet and hit the road. Not before I noticed that she had somehow gotten a fecal sample on her adorable, solid white, puffer jacket. I did tell her as she was spreading the tarp over her front seat and before she smeared it all over her leather, assuring her if she would just get Bill Riddle and me home I would get it cleaned. We took a couple of selfies and took off. I think maybe some other people were taking pictures of the two middle-aged ladies with the turkey in the Lexus, we were quite a sight traveling through Canton. Jackie had air in her seats that made the ride home so much more pleasant. It was Bill Riddle this time who settled into that silent stare out the window as his two captors laughed hysterically and may or may not have drooled and snorted. 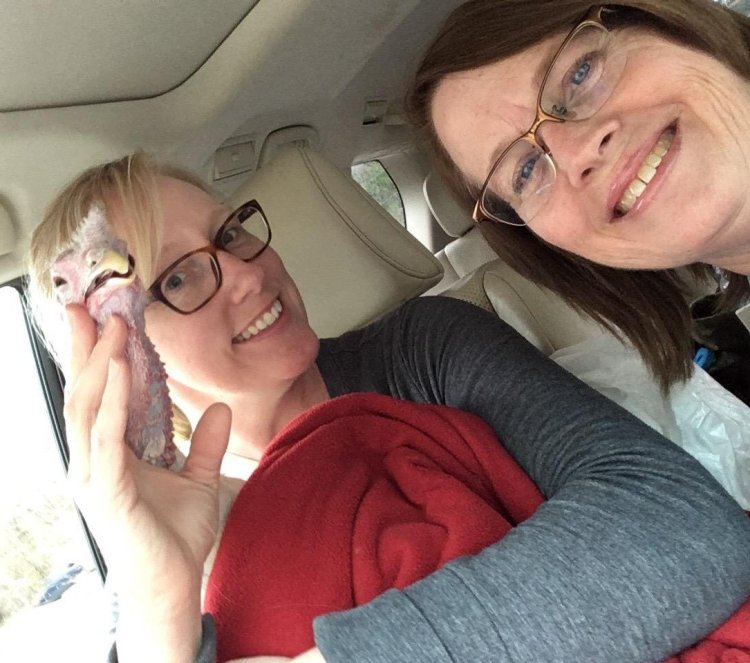 I will quickly take this moment to say the cost for vet visit and meds was under a grocery bill but a little more than a tank of gas in all our cars that run on a daily basis, not those cars out in the woods. I love you, you are so handsome, thank you for my children, and my animals, and all that goes into keeping this life of mine. I know I am high maintenance, maybe not in clothes and stuff but in animal care. You complete me! Bill Riddle is not out of the woods but you have given me the ability to say I have done all I can do. Now I wait. See you tomorrow night.

I believe in the God of the Bible and that Jesus is His Son who died on the cross at Calvary for the sins of the world. This free gift is for you and for me, if we accept that fact by faith and strive daily to follow His Living Word that is the same today, yesterday, and forever. Also, for the record, I love my boyfriend whom I have been married to for going on 18 years. We have two boys that are both in high school, which is taught at home by yours truly. Cats, dogs, chickens, ducks, goats, turkeys, squirrels, chipmunks, peacocks, song birds, coyotes, raccoons, opossums, all call our yard home and I have a story about all of them. I am originally from Kentucky, with deep roots in Eastern Kentucky's Appalachian Mountains. I grew up in a working class suburb of Lexington, Kentucky. I am married to a quiet feller from Birmingham, Alabama. We met in Tampa, FL, married, had two kids and moved to California. From there we landed in Alabama for a few years and then by the providence of God we moved to our little piece of heaven in Georgia where we live in a white house, on a little hill, in the rocky foothills of the Blue Ridge Mountains. I have some things I think I might want to write that maybe someone might want to read... mostly stories and experiences of my own and a few I can relay from second hand knowledge but none with great confidence, pride, or true story telling ability, just overthought ramblings that I quickly need to capture before I forget. View more posts